“The trend is your friend, until the end when it bends.”

Stock indexes making higher highs and higher lows is a good thing – until it isn’t.

I run a combination of systems. Most of them are trend following in nature, meaning the objective is to enter a trend early in its stage to capitalize on it until it changes.

But when trends reach an extreme it’s time to take note.

For me, what follows is what I consider market analysis, which doesn’t necessarily result in an specific trades, per se, but instead, it’s my intellectual exercise to understand what’s going on. And it’s nice to have an idea of when a trend may be ready to change.

It is the probative evidence considered by a judge or jury during a trial.

In this case, the jury are active investors in the market.

Probative evidence is having the effect of proof, tending to prove, or actually proving. So, when a legal controversy goes to trial, the parties seek to prove their cases by the introduction of evidence. If so, the evidence is deemed probative.

The weight of evidence, then, is based on the believability or persuasiveness of evidence.

Since we never know the future in advance, when we engage in market analysis, we necessarily have to apply the weight of the evidence to establish the probability.

After monitoring price trends and a range of indicators intended to measure the strength of a trend for more than two decades, I’ve got a feel for the weight of the evidence. So, my confidence in these observations has increased over time, even as imperfect as it is.

Let’s see some evidence to weight.

By the first of June, 98% of the S&P 500 stocks were trending up, above their short term trend 50 day moving average. Since then, we’ve seen some divergence between the stocks in an uptrend and the stock index.

It tells us fewer stocks are participating in the uptrend.

The advantage of monitoring breadth measures like % of stocks above a moving average or bullish percent is it’s a high level barometer that may highlight what is changing. Sometimes, it’s what is diverging.

In this case, the price trend of the stock index is diverging with the percent of stocks in a positive trend.

One of the warning signs in January and February was this same divergence between the uptrend in $SPY and the breadth of participation of the individual stocks in the index.

When I see divergence, it reminds me to look inside to see what has changed.

For example, over the past month, Technology and Communications have shown relative strength, but the momentum in Consumer Discretionary and Utilities are the laggards.

As a new trend gets underway, some of the component sectors within the S&P 500 diverge, so we also see it show up in the percent of stocks trending up vs. down.

After watching quantitive technical indicators like this since the 90s, I can also tell you we commonly see a breadth thrust in the early stages of a new uptrend. We did in January to February 2019 after the waterfall decline at the end of 2018.

A breadth thrust is bullish confirmation.

How long the trend may last, well, we’ve always preferred to see more stocks parts-cation in an uptrend than less. The theory is a broad uptrend that lifts all boats has more true momentum. An example of elevated breadth was 2017, when the stock index trended up with very little volatility or setbacks.

But if you look real close, that yellow highlight of 2017 also shows the percent of stocks above their 50 day moving average oscillated between the 50 and 95% zone throughout the year. It’s an oscillator, so it swings between 0% and 100%, but the fact it stayed above 50% in 2017 was a signal of internal strength. It often swings wider in a typical year, but 2017 was far from typical.

The bottom line is, what we have here, now, is fewer of the S&P 500 stocks trending up, which means more are crossing down below their intermediate trend trend line.

So, my interpretation is the trends are weakening, and it’s likely to be more reflected in the stock index eventually.

Investor sentiment is another essential measure.

Nothing drives investor sentiment like a price trend. As prices trend up, people get more bullish (or greedy) and as prices trend down, they feel more fear (of losing more money.)

The Fear & Greed Index tracks seven indicators of investor sentiment. It’s gradually dialing back up to Greed, but not yet Extreme Greed. 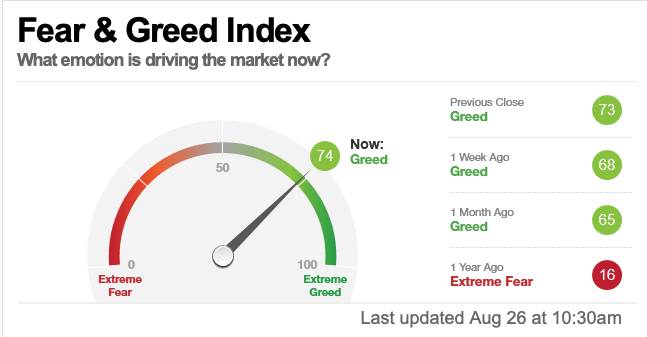 But when we take a look inside, and understand how it works, I see the main holdout is VIX . At around 22, the VIX still indicates a moderate level of FEAR, but we have to consider VIX is fading from its highest level, ever, so its absolute level may not be as indicative.

On the other hand, the level of the Put/Call Ratio is among the lowest levels of put buying seen during the last two years, indicating EXTREME GREED on the part of investors. 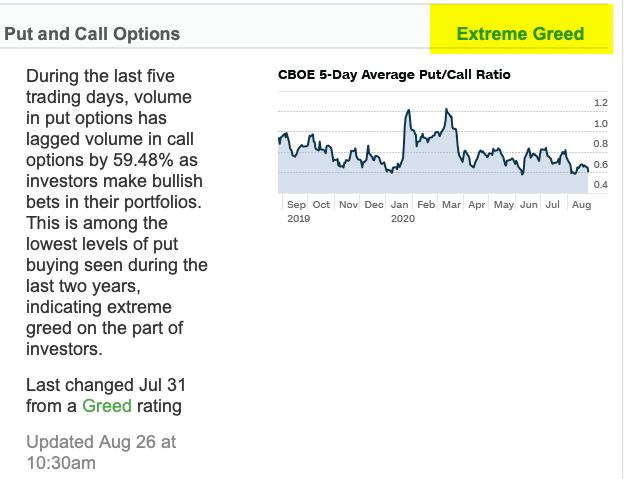 Junk Bond Demand has reached EXTREME GREED. Investors in junk bonds are accepting 2.05% in additional yield over safer investment grade bonds. This spread is much lower than what has been typical during the last two years and indicates that investors are pursuing higher risk strategies. 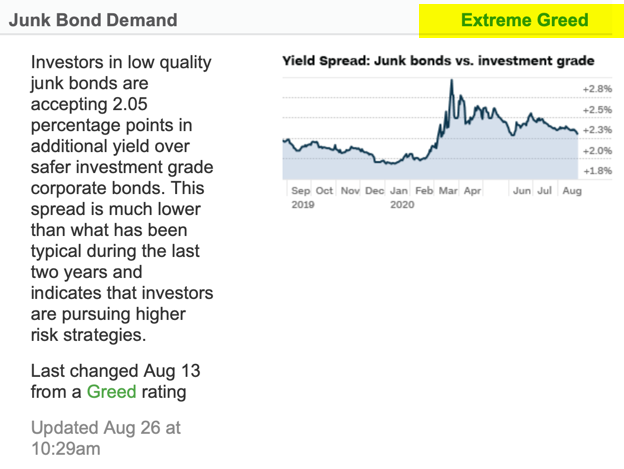 The 3rd EXTREME GREED indicator is the S&P 500 is 15.28% above its 125-day average. This is further above the average than has been typical during the last two years and rapid increases like this often indicate extreme greed, according to the Fear & Greed Indicator. 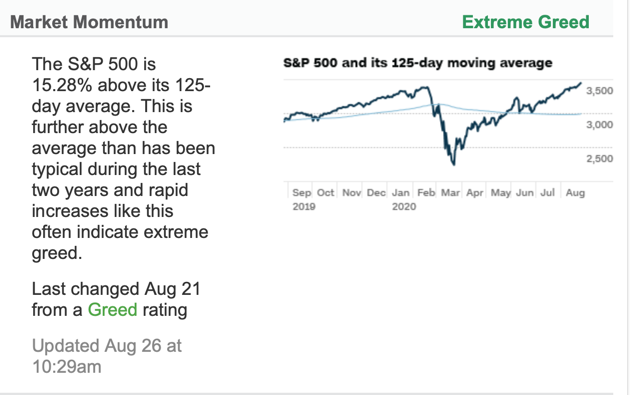 Aside from neutral $VIX, some other moderate hold outs of the 7 indicators include breadth. The Fear & Greed Indicator uses the McClellan Volume Summation Index, which measures advancing and declining volume on the NYSE. It has fallen from EXTREME GREED just over a week ago. 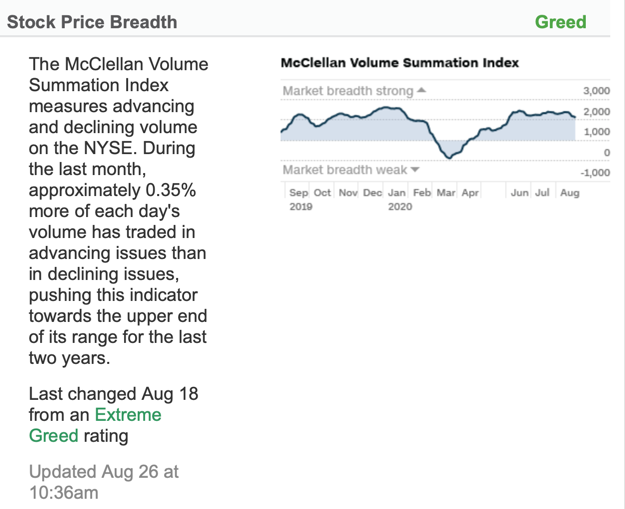 Stock Price Strength is another moderate GREED level. It says the number of stocks hitting 52-week highs exceeds the number hitting lows and is at the upper end of its range, indicating greed. 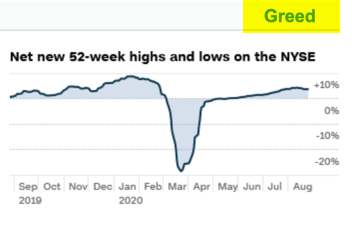 Safe Haven Demand is at a bullish investor sentiment level. Stocks have outperformed bonds by 6.87% during the last 20 trading days, close to the strongest performance for stocks/bonds in the past 2 years – investors are rotating into stocks from the relative safety of bonds. 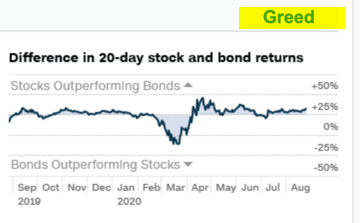 THE BOTTOM LINE IS: The seven indications of investor sentiment are dialing up to a very optimistic level, signaling investors are bullish on stocks.

Though some of it isn’t yet extreme, when we put it in context, anything can happen from here, but its now at a higher risk zone. 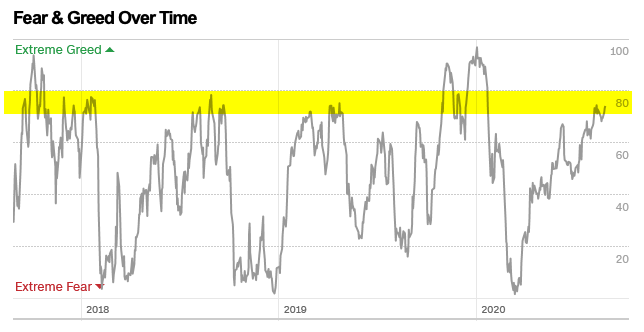 Another measure of investor sentiment is put volume. Puts are listed options on stocks and indexes that may be used to hedge the downside. The CBOE Total Put Volume is at the lowest level this year, which suggests there isn’t a lot of hedging taking place.

The NAAIM Exposure Index represents the average exposure to US Equity markets reported by the members of the National Association of Active Investment Managers. They are fully invested for the first time since December. Their exposure to the stock market has followed the trend of the stock index. 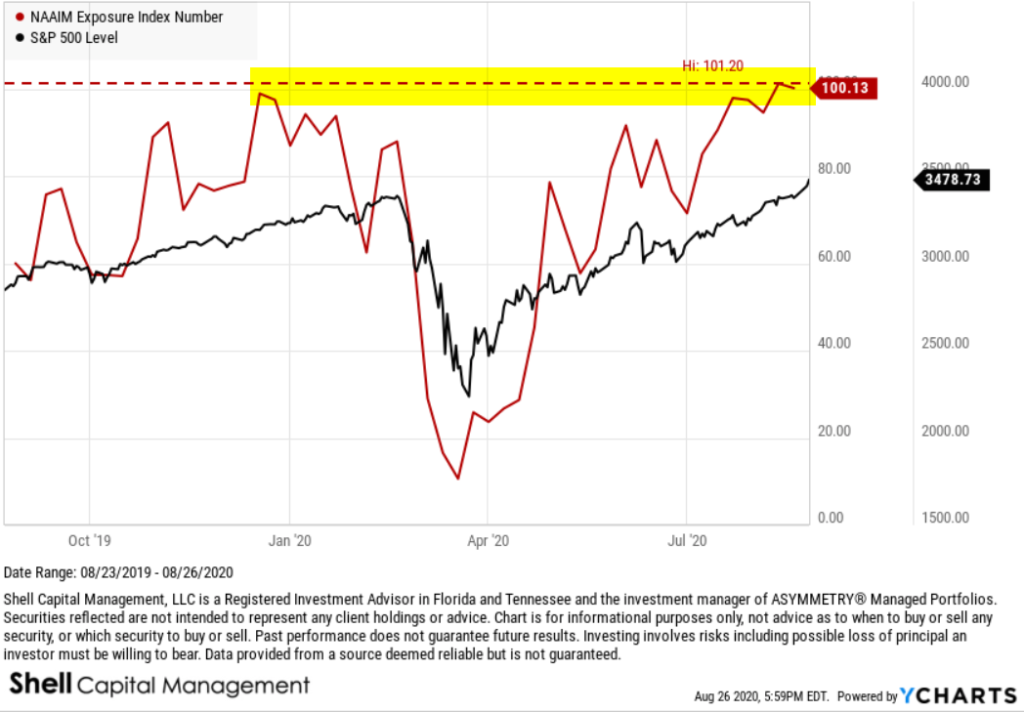 Another sentiment poll is the Advisors Sentiment, which was devised by Abe Cohen of Chartcraft in 1963 and is still operated by Chartcraft, now under their brand name of Investors Intelligence. This survey has been widely adopted by the investment community as a contrarian indicator. They say since its inception in 1963, the indicator has a consistent record for predicting the major market turning points. It has reached that point. 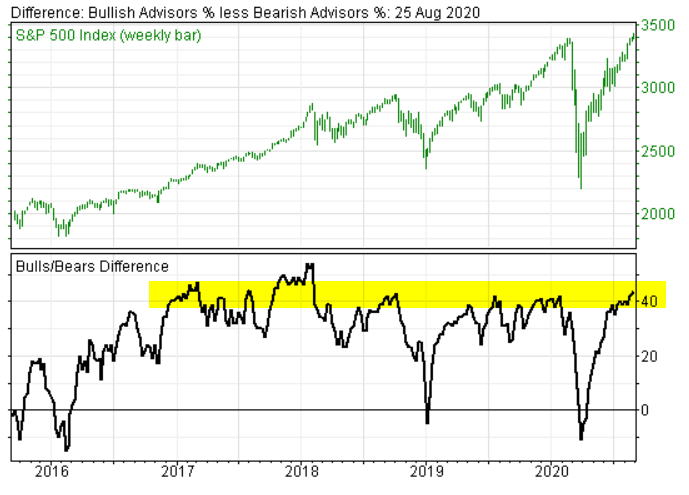 Speaking of Abe Cohen, another indicator he developed in the mid-1950s is the Bullish Percent Index. He originally applied it to stocks listed on the NYSE, but we have been doing the same for other listed stocks and sectors since. The NYSE Bullish Percent is an example of another gauge of overall market risk. A common analogy applied to the NYSE Bullish Percent is that of a football game: level of the bullish % represents the current field position and the “end-zones” are above 70% and below 30%.

Currently, at 70%, it has entered the higher risk zone, suggesting it’s time to put the defensive team on the field.

Many of these indicators are measuring the same thing; investor sentiment.

After everyone has already gotten bullish and put their money to work in stocks, we have to wonder where future demand for shares will come from.

It’s been a nice run, but stars are aligning to look more and more bearish in my opinion. Uptrends are great, but all good things eventually come to an end.

If we want to protect our profits, it is probably time to reduce exposure or hedge.

And that’s likely right about the time most people are excited about their stocks and wanting to buy more.

What could go wrong?

As of this writing, we have a CAT 4 hurricane just hours from hitting Texas and Louisiana, the Fed meeting tomorrow, and China firing missiles into a disputed sea.

That’s the weight of the evidence as I see it.

You can be the judge if the evidence is believable and persuasive enough, but the final arbiter will be the price trend in the coming weeks.